Saturn isn’t the only planet to have rings, but it definitely has the most beautiful ones. The rings we see are made of groups of tiny ringlets that surround Saturn. They’re made of chunks of ice and rock. Like Jupiter, Saturn is mostly a ball of hydrogen and helium.


Explore Saturn! Click and drag to rotate the planet. Scroll or pinch to zoom in and out. Credit: NASA Visualization Technology Applications and Development (VTAD)

When Galileo Galilei saw Saturn through a telescope in the 1600s, he wasn't sure what he was seeing. At first he thought he was looking at three planets, or a planet with handles. Now we know those "handles" turned out to be the rings of Saturn. 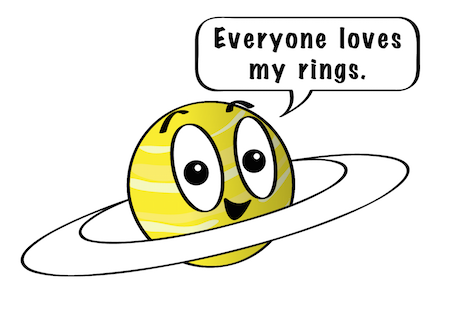 The Cassini spacecraft took this picture of Saturn's rings. You can see the grey and tan colors.

This is a picture of Saturn and its moons Tethys and Dione. Voyager 1 took this picture as it passed by.

NASA's Cassini spacecraft went behind Saturn and took this picture in 2013. You can see seven of its moons and its inner rings. In the background you can also see Earth.

A portrait looking down on Saturn and its rings. This picture was made from images taken by NASA's Cassini spacecraft in 2013. It was put together by amateur image processor and Cassini fan Gordan Ugarkovic.

Why does Saturn have rings?