Each of the planets in our solar system experiences its own unique weather. But one thing is certain: Only Earth has weather we can live with.

Let's take a weather tour of the solar system to see what each planet has to offer. 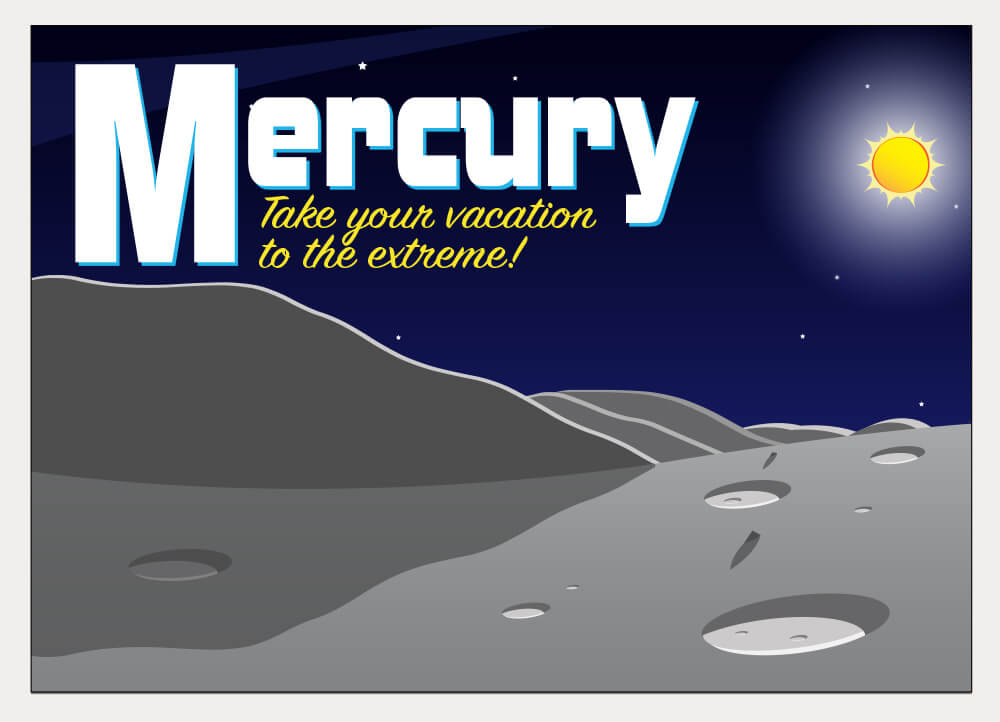 Because it is so close to the Sun, any vacation on Mercury would be ruined by extreme temperatures. During the daytime, the Sun would appear three times larger and more than 10 times brighter than it does here on Earth.

All of that sunlight can push temperatures as high as 800℉. That's even hotter than the oven can get in your kitchen at home! Then at night, because there is no atmosphere to trap the daytime heat, temperatures can drop as low as -300℉. Brrr!

These are pictures of the surface of Mercury captured by NASA's MESSENGER spacecraft. Credit: NASA/Johns Hopkins University Applied Physics Laboratory/Carnegie Institution of Washington 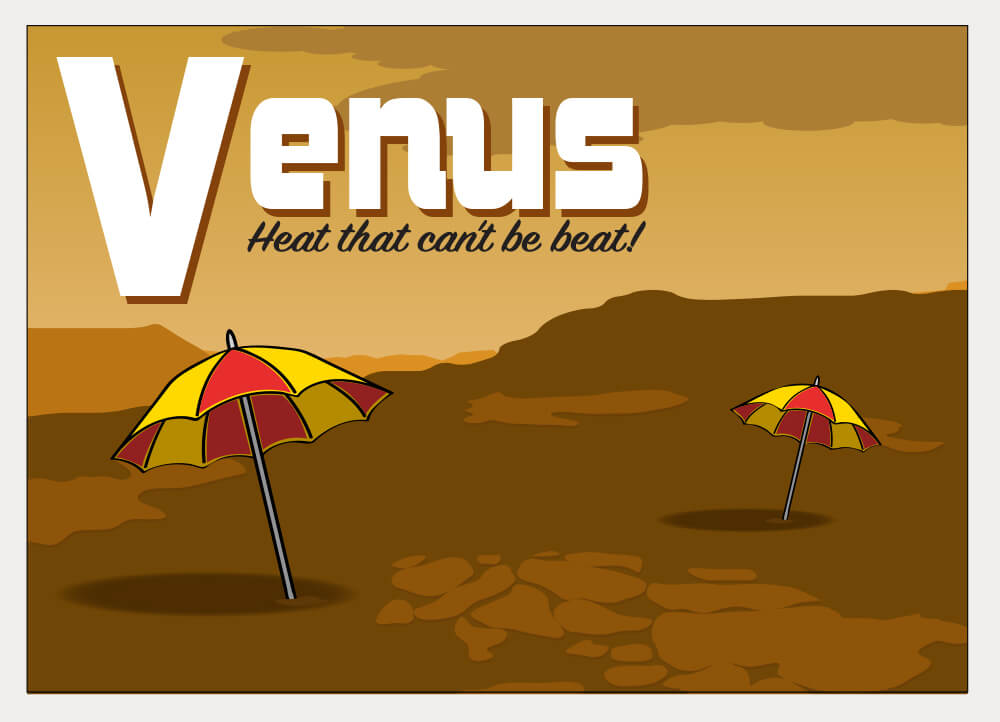 You might think that because Mercury is so close to the Sun, it would hold the record for hottest planet in the solar system. But that title actually belongs to Venus.

Venus is covered by a thick atmosphere of carbon dioxide and clouds made of sulfuric acid. Together, these act like a greenhouse, trapping heat and warming the planet. Venus can reach a scorching-hot average temperature of 847℉! If Venus ever had any oceans, they dried up long ago. 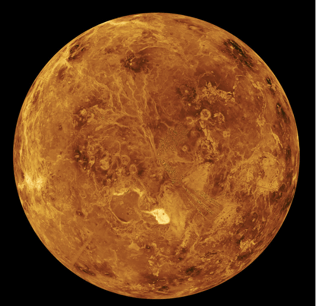 This is a mosaic of images captured by NASA's Magellan and Pioneer Venus spacecraft, which orbited Venus in the 1970s and 1980s. Credit: NASA/JPL-Caltech 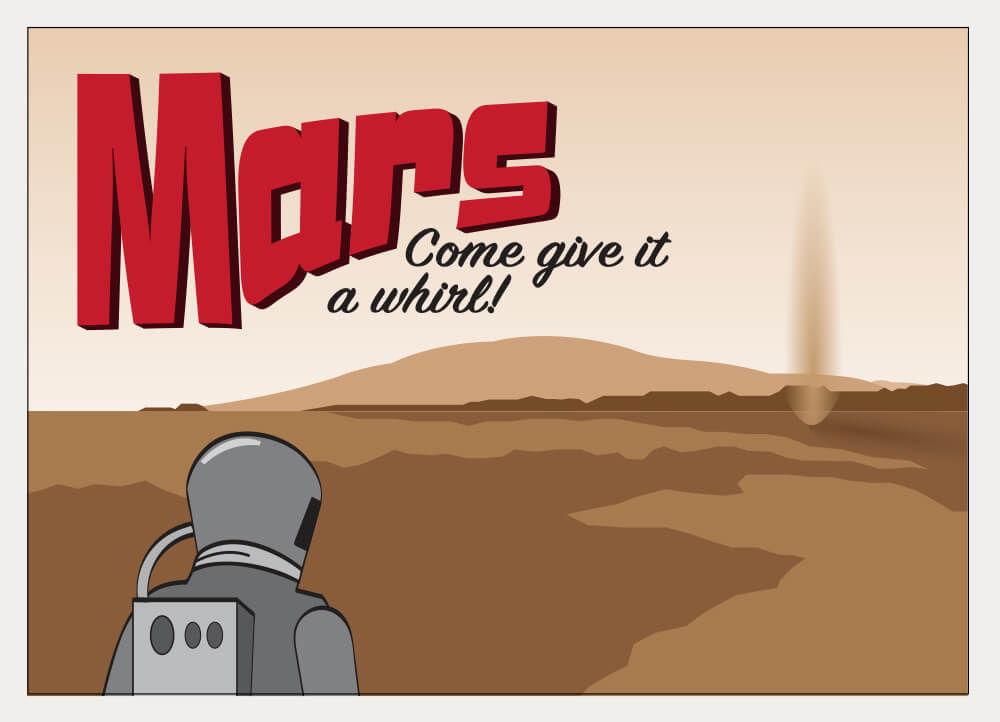 The many orbiters and rovers that have been studying Mars have found that there might have once been a lot of water on the Red Planet. But what's left is not enough to feed a water cycle like the one we have on Earth. So, Mars is mostly desert.

And on Mars, the desert comes with giant dust storms that can cover the planet in dust for weeks. Smaller wind patterns also kick up “dust devils,” like desert tornados.

Curious what the weather is like on Mars right now? Check out today’s weather report from the Insight lander on Mars! 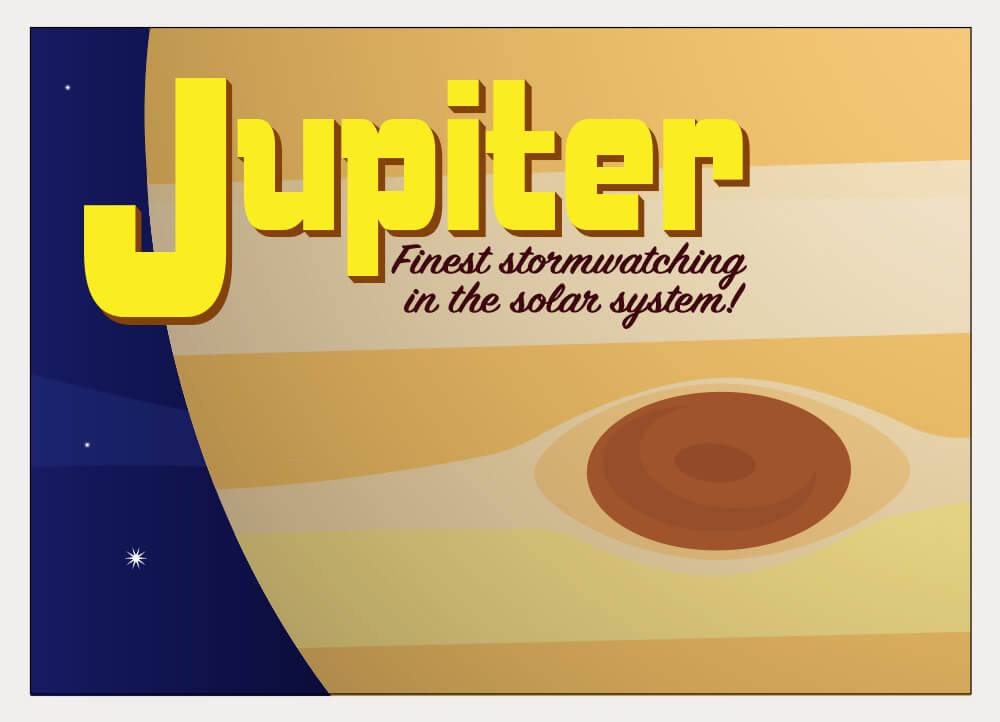 You couldn't really spend time on Jupiter's surface to experience the weather there. Jupiter is a gas giant—meaning it doesn't have a solid surface to stand on. That aside, we can still look at its weather.

Jupiter is a stormy planet that is probably best known for its Great Red Spot. The spot is actually a giant, wild storm that has been raging for more than 300 years. 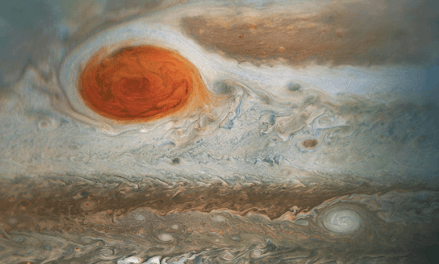 But the Great Red Spot is certainly not Jupiter's only storm. The entire planet is covered in bands of swirling clouds high in the atmosphere that are likely made mostly of ammonia. 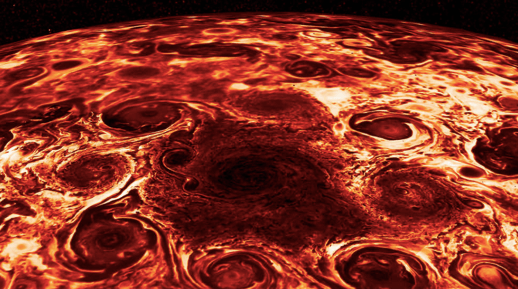 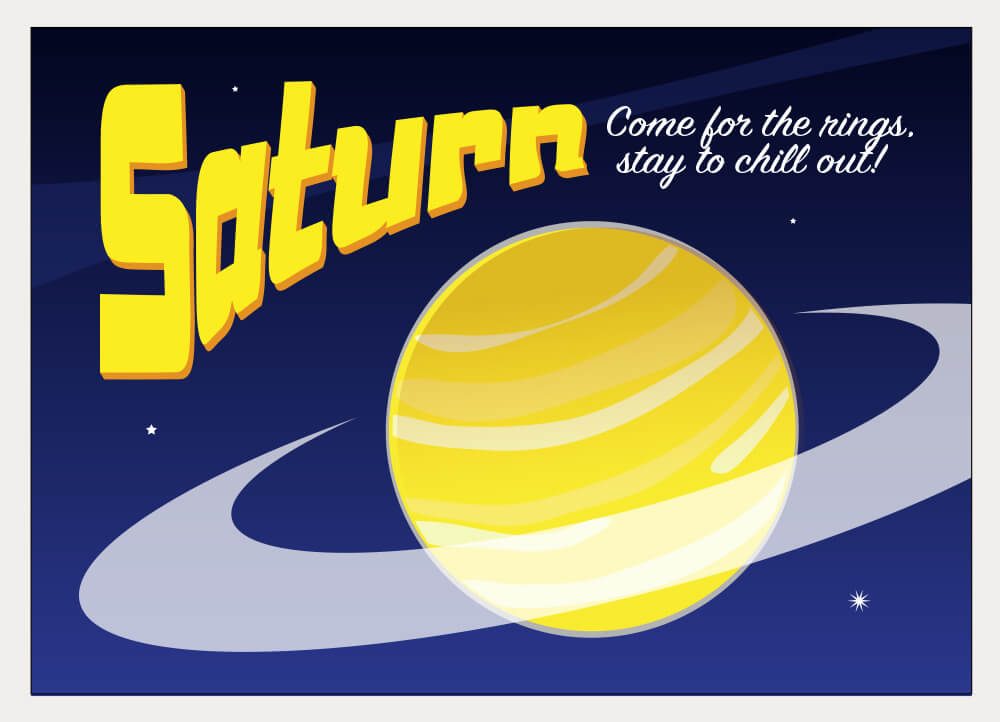 By the time you reach gas giant Saturn and its beautiful rings, you are really far from the Sun – about 900 million miles. That's almost twice as far out as Jupiter. That distance comes with a freezing average temperature of about -285℉.

The most familiar weather in the solar system is actually on Saturn's largest moon, Titan. Scientists believe that Titan experiences seasons, has clouds that rain and has an atmosphere made largely of nitrogen, just like ours.

Unfortunately, rather than a water cycle, Titan cycles a chemical called methane. The rain that falls from the clouds is methane, and it falls into lakes, rivers and seas of methane. And Titan is far too cold for human tourists. 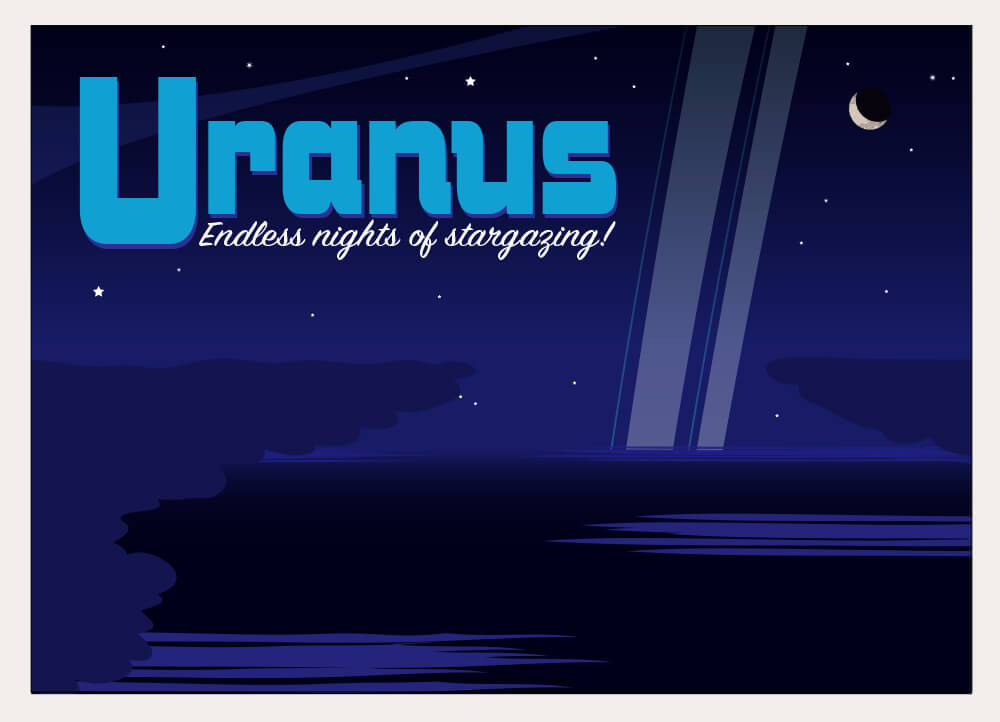 Uranus is known as an ice giant, and it lives up to that name. Its temperature is about -360℉.

Uranus is also tilted on its axis by 98 degrees. Scientists believe that it was knocked on its side by a large object long ago.

Since Uranus is so far away, it takes about 84 Earth years to make a single orbit. And each of its seasons is 21 Earth years long!

Uranus' tilt causes some unusual seasonal changes as it orbits the Sun. In summer and winter, large parts of the planet see nothing but daytime or nighttime for the whole season – 21 years. In spring and fall, Uranus goes through a full day-to-night cycle every 17 hours. Uranus sometimes has huge storms, and this unusual seasonal cycle might play a part in them. 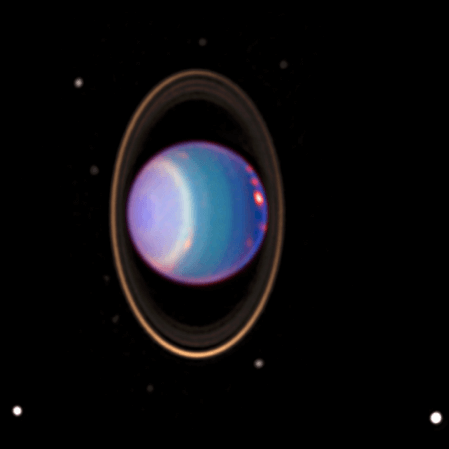 Observations with the Hubble Space Telescope have revealed more clouds on Uranus than was once thought. Credit: NASA/JPL/STScI 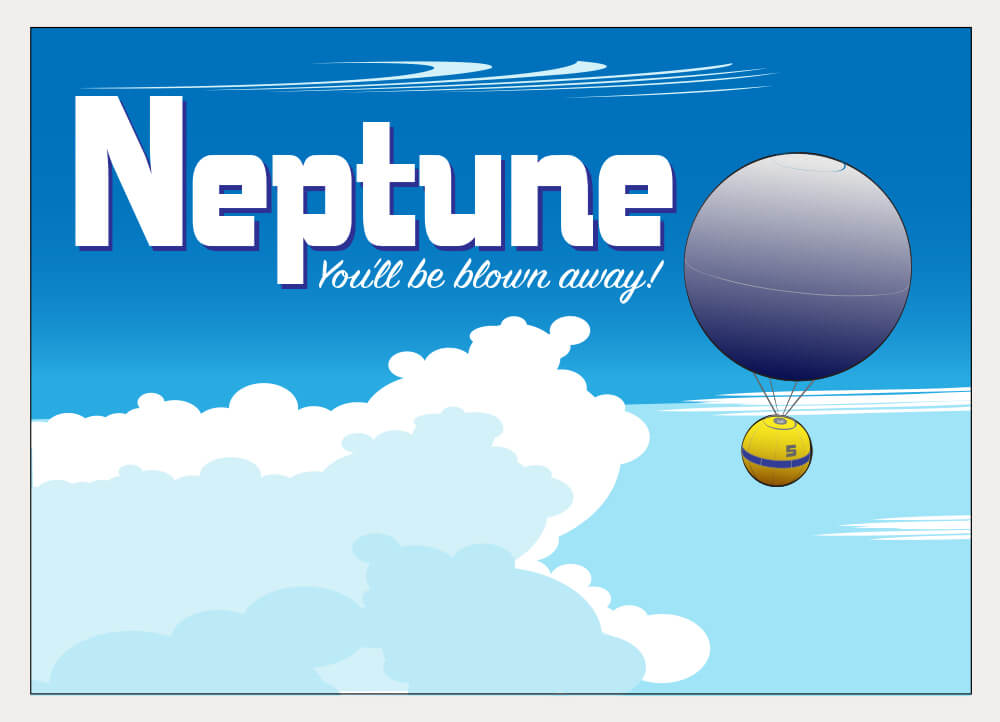 Neptune is way out there – an average of 2.8 billion miles from the Sun. That means the ice giant is seriously cold. The average temperature on Neptune is about -360℉.

Neptune has a thick atmosphere and is covered by constantly changing clouds that whip around the planet. Wind is the name of the game on Neptune. Wind speeds there have been measured at near 1,200 miles per hour, making them the fastest in the solar system! 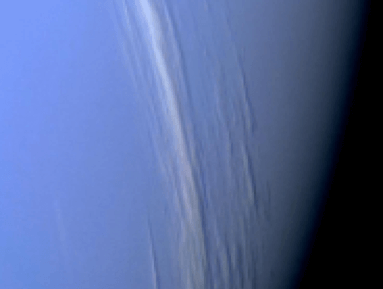 This image captured by Voyager 2 shows some of the bright cloud streaks above Neptune. Credit: NASA/JPL


Earth has some pretty wild weather. But after seeing the other options in our solar system, it seems like a pretty good place to live!

The best way to handle Earth's extreme weather is to be prepared and keep an eye on the weather forecast. Thankfully, NOAA's Geostationary Operational Environmental Satellite-R (GOES-R) series of weather satellites is always monitoring severe weather.

GOES-R satellites track hurricanes, tornadoes and other big storms. These satellites also keep an eye on weather caused by the Sun – called space weather. With this information, meteorologists can make forecasts that help people stay safe.

Earth may not be the only planet with weather, but it's got the only weather we can live with!