Play Nanosat Flingman! This game is like Hangman, except the answers all have to do with the story about the three little piggy-back satellites, which you can read below. Four right answers will toss the Space Technology 5 spacecraft like a Frisbee!

Flash is required for this activity 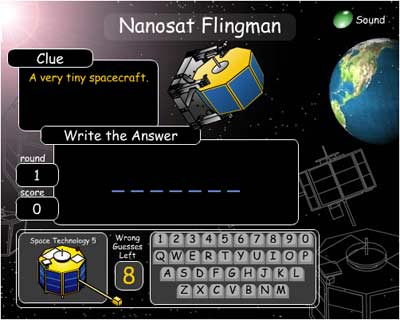 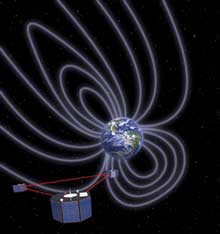 . . . three tiny spacecraft were preparing for a very important mission. First, they had to get themselves to Earth orbit. Spacecraft in Earth orbit are called satellites, so from now on that's what we will call them. After they got into orbit, one of their jobs was to study Earth's magnetic field. But, just as important, their job was to test themselves. You see, they were unlike any satellites that had ever flown in space before. They could do everything other satellites could do, but they were much, much smaller.

Just how small were they? They were only about the size of a small television (TV). They were so tiny, they were called "nanosats," since "nano" means very, very small. How could they be so small? Spacecraft builders had worked very hard to shrink all their electronic and mechanical parts to be very light weight and fit into a very small space. The three nanosats were called ST5s because their mission was called Space Technology 5.

The ST5s were so small and used so little electricity that all the solar cells they needed could fit around them like a blanket. (Solar cells convert the Sun's energy to electricity to power the spacecraft's electronics.) Most spacecraft have their solar cells on panels that stick out like arms, which adds to their weight.

The three ST5 nanosats were so small that they didn't need a whole Space Shuttle or big rocket to get themselves into Earth orbit. So they found a tiny rocket called a Pegasus to carry them. The Pegasus, with the tiny satellites inside, hitched a ride on a big airplane up to about 40,000 feet above the ground. Then the airplane dropped the Pegasus rocket, the rocket started its own engines, and took the satellites the rest of the way to orbit. (Read more about the Pegasus rocket.) 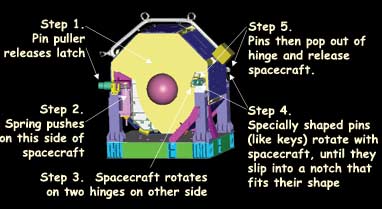 So, when the big day came (in 2006), the little ST5 nanosats caught their ride to space. At just the right time, the spacecraft builders' clever Frisbee-tossing machine sent the little satellites spinning into space to carry out their important mission.

Getting the right spin

This launcher gently tossed the ST5 satellites into orbit as if they were Frisbees.

How to yell across a solar system

Getting the right spin

This launcher gently tossed the ST5 satellites into orbit as if they were Frisbees.