What Is the Kuiper Belt?

The Short Answer:
The Kuiper Belt is a ring of icy bodies just outside of Neptune’s orbit. Pluto is the most famous Kuiper Belt Object.

The Sun is at the center of our solar system. It is orbited by eight planets: Mercury, Venus, Earth, Mars, Jupiter, Saturn, Uranus, and Neptune. But what’s past Neptune?

Just outside of Neptune’s orbit is a ring of icy bodies. We call it the Kuiper Belt. It’s pronounced ky-purr.

This is where you’ll find dwarf planet Pluto. It’s the most famous of the objects floating in the Kuiper Belt, which are also called Kuiper Belt Objects, or KBOs.

Why is it named Kuiper?

The Kuiper Belt is named after a scientist named Gerard Kuiper. In 1951 he had the idea that a belt of icy bodies might have existed beyond Neptune when the solar system formed. He was trying to explain where comets with small orbits came from. No one had seen anything out there yet because it’s hard to see small comets past Neptune even with the best telescopes. But even without being able to see it with his own eyes, Kuiper made a prediction. And it turned out to be right.

There are bits of rock and ice, comets, and dwarf planets. Besides Pluto, two other interesting Kuiper Belt Objects are Eris and Haumea.

Eris is a Kuiper Belt Object a little smaller than Pluto. It is so far away it takes 557 years to orbit the Sun. Eris has a small moon named Dysnomia.

Another interesting Kuiper Belt Object is Haumea. It’s shaped like a squashed American football about 1,200 miles (1,931 km) long. It spins end over end every few hours. The strange shape and rotation were caused by a collision with an object about half its size. When Haumea and this other object smashed into each other, the impact blasted away big pieces of ice and sent Haumea spinning. 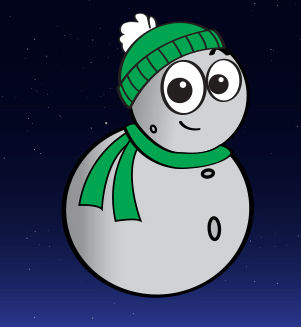 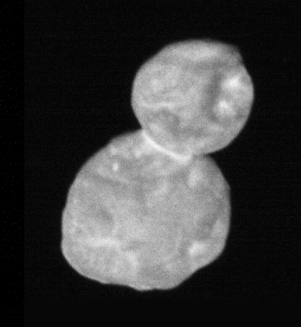 A billion miles past Pluto there is a relatively small snowman-shaped object named Arrokoth. Originally called MU69, this Kuiper Belt Object was first spotted in 2014 by the Hubble Space Telescope. Then in 2019, the New Horizons spacecraft actually flew right by it and captured some pictures!

Arrokoth is the farthest world ever studied up close by a spacecraft. Its name is a Native American term meaning “sky” in the Powhatan/Algonquian language. Scientists think Arrokoth might hold clues about the formation of our planet and the origin of life on Earth.

The Kuiper Belt is still a very mysterious place, and we have a lot to learn about it. New Horizons will keep exploring the Kuiper Belt and sending us more information about it.

Learn more about the Kuiper Belt

More about the solar system

What's past the Kuiper Belt?

Why are planets round?

Thirsty? Have a comet!

More about the solar system

What's past the Kuiper Belt?

Why are planets round?