Earth has a lot of water. It's one of the things that makes our big, blue planet so special. Learn more about Earth's water in this video! 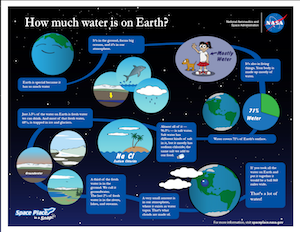 Earth is special because it has so much water. It’s in the ground, forms big oceans, and it’s in our atmosphere.

It’s also in living things. Your body is made up mostly of water.

Water covers 71 percent of Earth’s surface. And almost all of it—96.5 percent—is salt water.

Salt water has different kinds of salt in it, but it mostly has sodium chloride, the same salt we add to our food.

Just 3.5 percent of the water on Earth is fresh water we can drink. And most of that fresh water, 68 percent, is trapped in ice and glaciers.

A very small amount is in our atmosphere, where it exists as water vapor. That’s what clouds are made of.

If you took all the water on Earth and put it together it would be a ball 860 miles wide. That’s a lot of water!

Our World: ICESat-2 - What Is Ice?
Our World: Why Are Oceans Salty?
Real World: Global Cloud Observation Day

What Is a Solar Eclipse?
More Less
More Less