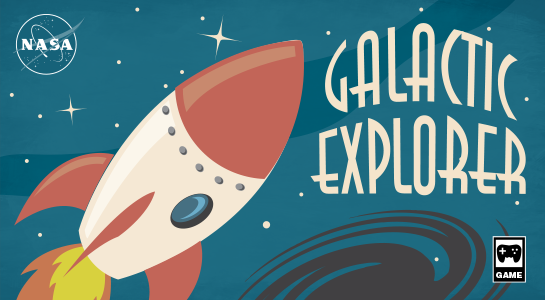 Your mission is to safely fly your spacecraft on a journey. You'll want to visit as many galaxies as possible.

A galaxy is a huge collection of gas, dust, and billions of stars all held together by gravity. All galaxies are made up of these same things. However, they come in many different shapes and sizes.


Here are a few types of galaxies you might see out your window as you're jetting through the universe:

Spiral galaxies look like giant pinwheels. The arms of the pinwheel are made up of stars and lots of gas and dust. Gas and dust are some of the main ingredients needed to form new stars. Young stars burn much hotter than older stars, so spiral galaxies are often some of the brightest in the universe. About 20% of all galaxies are spirals. Our home galaxy, the Milky Way, is a very good example of one.

And one word of warning, explorer: be on the lookout for quasars! Quasars are compact areas in the center of a galaxy. They give off enormous amounts of energy. Quasars are actually some of the brightest objects in the universe. Just don't fly towards the quasars. They can damage your spacecraft!

What are black holes?

How Old Are Galaxies?

What Is a Galaxy?
More Less
More Less

What are black holes?