For information about how to safely view an eclipse, go here: eclipse2017.nasa.gov/safety


What is a solar eclipse?

A solar eclipse happens when, at just the right moment, the moon passes between the sun and Earth. Learn all about solar eclipses in this video! 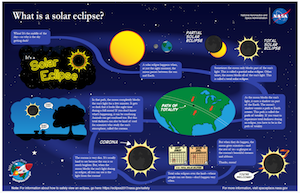 Space Place… in a snap!

Whoa! It’s the middle of the day—so why is the sky getting dark?

A solar eclipse happens when, at just the right moment, the moon passes between the sun and Earth.

Sometimes the moon only blocks part of the sun’s light. This is called a partial solar eclipse.

Other times, the moon blocks all of the sun’s light. This is called a total solar eclipse.

As the moon blocks the sun’s light, it casts a shadow on part of the Earth.

The moon’s shadow creates a trail as Earth rotates. This trail is called the path of totality.

If you want to experience total darkness during an eclipse, you have to be in the path of totality.

In that path, the moon completely blocks the sun’s light for a few minutes. It gets so dark that it looks like night time during a full moon!

If you don’t know what’s happening, it can be confusing. Animals can get confused too.

But this total darkness can also be kind of cool for scientists who study the sun’s atmosphere, called the corona.

The corona is very dim. It’s usually hard to see because the sun is so much brighter.

But, when the moon blocks the sun’s light during an eclipse, all you can see is the light from the corona!

But when they do happen, the moon gives scientists—and the rest of us—a glimpse at the corona’s beautiful streams and ribbons. Thanks, moon!

Find out more about the sun at NASA Space Place.

What is the sun's corona?

How is the sun completely blocked in an eclipse?

How Is the Sun Completely Blocked in an Eclipse?

Where Does the Solar System End?
More Less
More Less

What is the sun's corona?

How is the sun completely blocked in an eclipse?