Disclaimer: This material is being kept online for historical purposes. Though accurate at the time of publication, it is no longer being updated. The page may contain broken links or outdated information, and parts may not function in current web browsers.

What are Black Holes Anyway?

Artist's idea of a black hole, with gas and dust swirling rapidly around it before being pulled in by its powerful gravitational field. You can't really see the black hole itself.

Black holes are not really holes at all. They are the opposite of empty! Black holes have the most matter stuffed into the least space of any objects in the universe. Because they are so compact, they have very strong gravity.

Here on Earth, gravity is what makes things fall down, rather than just float away, when you let go of them. Gravity is what you are measuring when you step on a scale to weigh yourself. Your weight is the amount of force that Earth's gravity exerts on you. The more matter your body contains, the more you weigh. Likewise, the more matter an object has, the stronger its gravity.

The gravity of a black hole is so strong that not even light can escape. Even if a bright star is shining right next to a black hole, you cannot see the black hole. Instead of reflecting the light as other objects do, the black hole just swallows the starlight forever. Any matter that gets too close to a black hole gets swallowed up as well.

There are at least two kinds of black holes

One kind is called a stellar-mass black hole. You can think of it as a "one-big-star" black hole. This type of black hole forms when a big star burns up all its fuel and explodes (called a supernova). Then what's left collapses into a super-compact object—a black hole. Stars must contain quite a bit more matter than our Sun for this to happen. So our Sun, and most stars, will never become black holes.

Stellar-mass black holes are only a few tens of kilometers across—maybe about 40 miles. Just imagine. Our Sun is so huge that about one million Earths would fit inside it. A star with enough matter to become a black hole contains maybe 10 times as much matter as the Sun. Now imagine a star with that much matter, shrinking into a space no farther across than the distance you can drive a car in less than one hour!

A black hole with all the mass of Earth would be about the size of a fingernail!

Scientists really want to learn more about black holes and other strange and massive objects in the Universe. 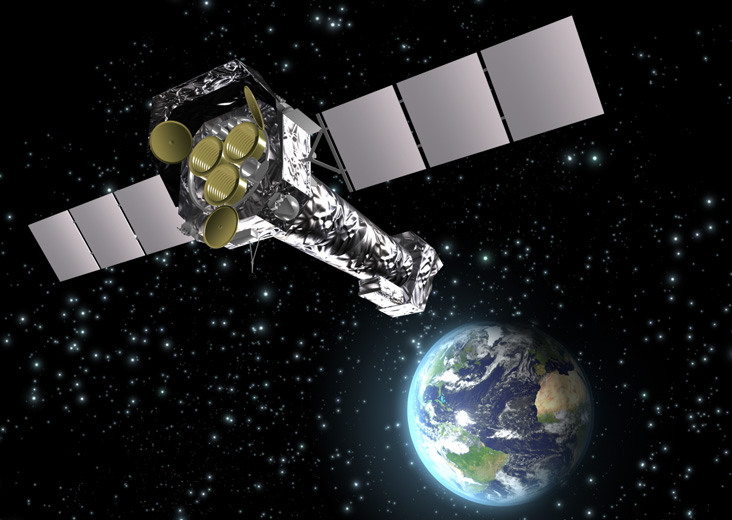 One space mission that is helping them do just that is a space telescope called XMM-Newton. It was launched into Earth orbit in 1999 by NASA and the European Space Agency. It observes the universe in high-energy x-rays, a type of light that we can't see with our eyes. Matter, such as gas and dust particles, near black holes puts out x-rays as it swirls around at light speed just before the black hole swallows it up. By observing these x-rays, XMM can help scientists understand the black hole.

In this game, you must rescue words, one letter at a time, before they are pulled in by the powerful gravity of the black hole.

In this game, you must rescue words, one letter at a time, before they are pulled in by the powerful gravity of the black hole.