Images in the Spitzer Concentration game 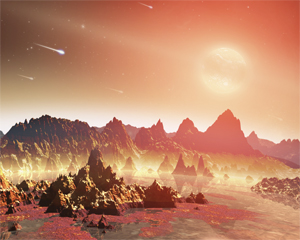 Brown dwarf:
A young planet orbits a cool star called a brown dwarf. Brown dwarfs are common in our galaxy. This imaginary planet has a soupy mix of chemicals pooling around the base of the jagged rocks. On Earth, life may have arisen out of such pond scum. 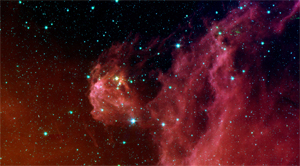 Orion's head:
This infrared view from Spitzer shows the head of Orion the Hunter, a familiar constellation. Astronomers suspect a supernova explosion in Orion's head nearly three million years ago sparked the formation of many new stars. 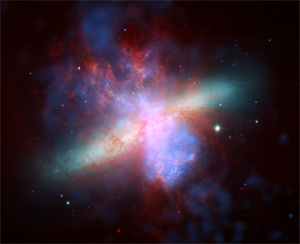 M32:
Three of NASA's great observatories joined forces to create this rainbow of a galaxy. This image was made using infrared light from Spitzer, visible light from the Hubble Space Telescope, and X-rays from the Chandra X-ray Observatory. 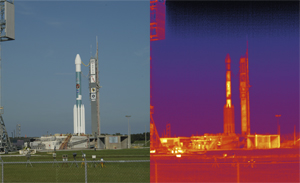 Spitzer:
The Spitzer Space Telescope ready for launch on a Delta rocket in 2003. The launch pad appears in visible light (left) and in infrared light. The warmest areas appear white and yellow. The coolest are purple and dark blue. 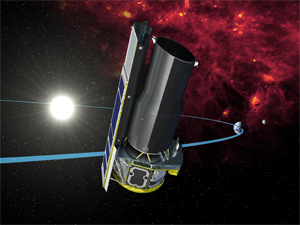 Spitzer in orbit:
The Spitzer Space Telescope in its Earth trailing orbit around the Sun. It is far from the warm Earth (radiating in infrared) so that its sensitive instruments can more easily detect infrared light from other sources in the Universe. 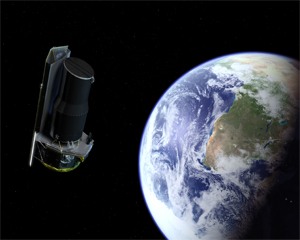 On its way:
The Spitzer Space Telescope on its way to its Earth-trailing orbit. Spitzer orbits the Sun in the same path as Earth, except following far enough behind so that heat from Earth will not interfere with Spitzer's sensitive instruments. 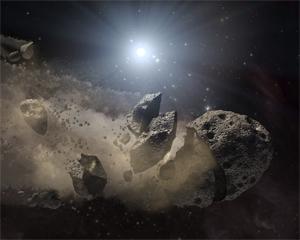 Alien asteroids:
How asteroids might look after breaking up when they get too close to their star. In this case, their star is a white dwarf, the remains of a star like our Sun at the end of its life. Spitzer's infrared detectors sense these dusty clouds and what they are made of. 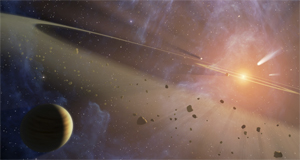 Epsilon Eridani:
The closest known planetary system to our own might look like this. The Spitzer Space Telescope has detected two asteroid belts, a couple of planets, and an outer ring of comets. 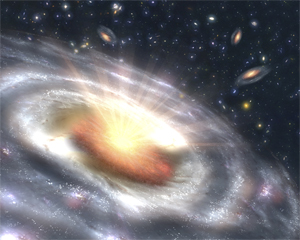 Quasar:
An artist imagines a quasar (orange), with a growing black hole at its center. The quasar is a doughnut-shaped cloud of gas and dust that feeds a central supermassive black hole. 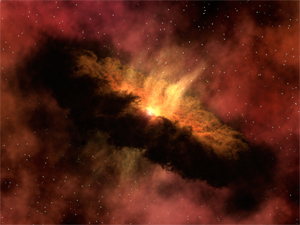 Baby solar system:
Spitzer has discovered an infant solar system like the one in this artwork, with enough water vapor to fill the oceans on Earth five times. Eventually, this water might make its way into developing planets. 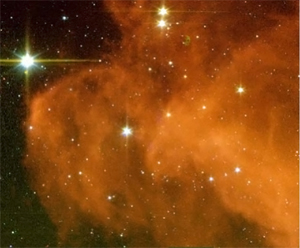 Witch:
This is the Witch Head Nebula in infrared. New stars are forming in this gigantic murky cloud 800 light-years away in the Orion Constellation. This image does not show the entire nebula, so it's hard to see the witch. 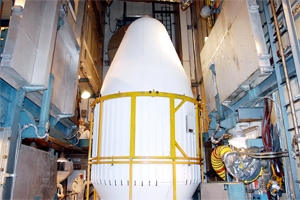 Fairing:
The Spitzer Space Telescope is inside the rocket's nose, which is called a fairing. It will protect the telescope as the rocket carries it to space. Once in space, the fairing will open and release the telescope, which will travel on to its planned orbit. 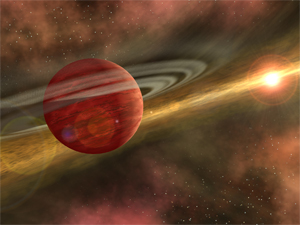 CoKu Tau 4:
The Spitzer Space Telescope found a clearing in the dusty disk around the star CoKu Tau 4. The clearing hints that a large planet could be in orbit there. The planet could be as massive as Jupiter and may look like our own Jupiter looked billions of years ago.

Pink cloud:
Remains of a supernova, when a massive star exploded, blasting waves of hot gas into space. This image combines X-rays and infrared light.

Pink spots:
The bright pinks dots are baby (girl?) stars in the Serpens star-forming region. Each young star is surrounded by a disk of gas and dust that could someday form into planets.

Baby solar system:
This could be a baby picture of our own solar system. A young star shoots out jets of gas. The star is hidden in the dusty disk that may one day become a system of planets like our own.

Bubbles:
A bubble-blowing baby star appears as a small white dot in the center. It is shooting out jets of gas that smash into a surrounding cloud of dust and gas, forming bubbles.

Coronet:
This star-forming region called Coronet has stars of many ages and sizes. Astronomers can learn a lot about stars from studying a region like this. This image combines X-rays and infrared light.

M106:
This image of galaxy M106 combines several kinds of light. Two of the arms (purple and blue) don't even show up in ordinary light, but are revealed in radio waves and X-rays.

Blue Santa:
Some say this blue cloud in the Orion Nebula looks like Santa Claus! Lots of huge stars are forming here. They blow off this hot gas (the blue cloud) that shines in X-rays.

Whirlpool:
The Whirlpool Galaxy, M51, is stunning is this image, which combines x-ray data from the Chandra X-ray Observatory, optical data from Hubble, and infrared data from Spitzer.

M81:
M81 is one of the brightest galaxies in our sky. If you look in the constellation Ursa Major, you might barely see it with your naked eye. It takes up about as much sky as the Moon.

RCW 108:
Stars are forming in this cloud of gas and dust called RCW 108, in our own Milky Way Galaxy. This picture combines X-ray (in blue) and infrared (red and orange) images.

Crab Nebula:
In 1054 AD, people saw a spectacular supernova in the constellation Taurus. This "Crab Nebula" is what remains of that event. This image combines X-ray, visible, and infrared light.

Galaxies interact:
These two galaxies—shown in infrared, ultraviolet, and visible light—are so close they distort each other with their gravitational fields.

Planet formation:
Artwork of a star like our Sun surrounded by a disk of dusty debris that might form into planets—except all the dust is being blasted away by a much larger, hotter star nearby.

Helix Nebula:
The Helix Nebula always seems to be looking back at us. It is the leftover cloud of debris from the death of a star like our Sun.

Binary stars:
Wow, a solar system with two suns! This type of solar system could be very common in the universe—maybe even more common than single-star systems like ours.

Double helix:
This dusty cloud near the center of our galaxy looks like two strings twisted around each other. Scientists think strong magnetic fields may have caused this shape.

Cass A:
The Spitzer telescope captured this infrared "light echo" from the Cassiopeia A supernova. A supernova is the spectacular explosion at the end of a massive star's life.

RCW 49:
New stars are being born in this dusty region called RCW 49. Even this thick cloud of dust and gas cannot hide the young stars from Spitzer's infrared-sensing "eyes."

Perseus:
In this infrared image of the Perseus Nebula, the green wisps are polycyclic aromatic hydrocarbons, or PAHs. This substance is like black grease on a barbecue grill!

Comet Galaxy:
It is the bright red object on the left in this Spitzer infrared image. The galaxy is being ripped apart by the gravitational forces at the center of galaxy cluster Abell 2667.

NGC 2841:
This Spitzer infrared image of spiral galaxy NGC 2841 shows dust and gas (red in the image) invisible to our eyes or to ordinary telescopes.

Hot Jupiter:
This artwork shows a "hot Jupiter," a huge gas planet that orbits very close to its star. Spitzer has found several of these and taken their "fingerprints" to find out what they're made of.

Transit:
Artwork of an extrasolar planet as viewed in infrared as it passes in front of its star. The Spitzer Space Telescope detected water vapor in the planet's atmosphere.

N49:
This supernova remnant called N49 looks like a pink and purple flame. This image combines X-ray data from the Chandra X-ray Observatory and infrared light from Spitzer.

Starburst:
In this visible light image from the Hubble Space Telescope, a collision of galaxies has triggered the birth of lots of new stars. Called Zw II 96, this untidy heap is called a starburst galaxy.

Fireworks:
The Fireworks Galaxy, or NGC 6946, is a neighbor of our own galaxy. It is "only" 10 million light-years away. Regions where new stars are forming are red in this infrared Spitzer image.

Cassiopeia A:
This lovely cloud of gas and dust is the remains of a supernova explosion. Called Cassiopeia A, this cloud contains enough material to make 10,000 Earths!

Comets?
No. They are stars like our Sun, with disks of planet-making dust around them. Too bad the planet ingredients are being blasted away by radiation from bigger stars.

Cat's Eye:
This nebula is the cloud of glowing dust left from the last gasps of a dying star.

Snake?
The Serpens South star cluster includes 50 young stars pulled close to each other by gravity. In this infrared Spitzer image, the stars are the green, yellow, and orange specks.

Blue blobs:
In blue is hydrogen heated by jets of hot gas blasting out of a star (cloaked in dust and not visible). The jet of gas is ramming into a wall of material, shown as pink.

Baby Boom:
This fuzzy picture is a galaxy 12.3 billion light years away! It is churning out 4,000 new stars per year. Maybe that's why it is nicknamed "Baby Boom."

Pinwheel:
The Pinwheel Galaxy, M101, as Spitzer sees it in infrared light. It is 27 million light-years away in the constellation Ursa Major.

IR Coronet:
This star-forming region has stars of many ages and sizes. This Spitzer infrared image shows both the young stars and the gas and dust from which the stars form.