Last night, I dreamed that I went surfing in outer space. I strapped my surfboard to my color noun and traveled to Saturn’s largest moon, Titan. When I got there, I found plural noun , rivers, and plural noun. It looked a little bit like famous place! But best of all, I found huge lakes full of a adjective liquid. I felt the adjective wind pick up and all of a sudden I saw waves. I couldn’t wait to jump in! I paddled through the lake and caught a adjective wave. As I surfed toward the adjective shore, I saw Saturn’s rings in the sky above me. I woke up and realized I was only verb ending in 'ing' . But I still wondered if it might be possible to go surfing somewhere besides Earth someday. 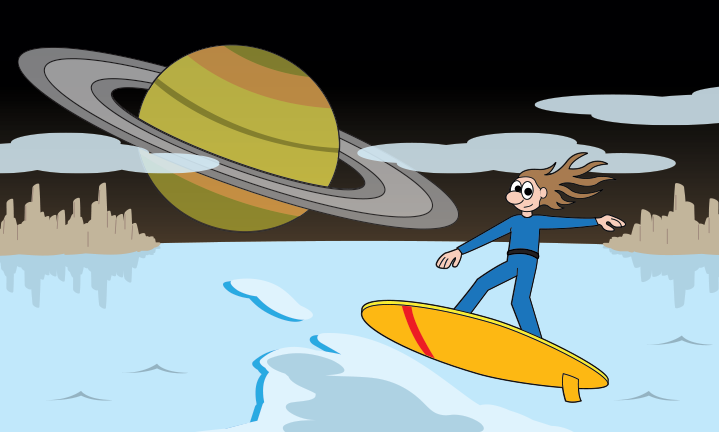 Saturn’s largest moon, Titan, is a lot like Earth in many ways. Like Earth, it has dunes, rivers, and lakes. It has a climate that creates weather too. But the rivers and lakes are filled with the chemicals methane or ethane, not water. Methane and ethane are gases here on Earth. But on Titan, it is so cold that these gases form liquids. It might even rain methane on Titan! Scientists have been looking at Titan for years. They haven’t seen any waves on the lakes and rivers yet, but they predict that as the seasons change the winds could get stronger. Stronger winds could make waves. Scientists hope to test this theory by snapping photographs of the moon’s oceans from a NASA spacecraft orbiting Saturn. They would be the first surfable waves found outside of Earth!