Sometimes the sky really is falling! Last night, a softball-sized rock crashed through our roof and landed on the nounin my room. What a scary way to wake up! Good thing it missed our kind of pet! It looked very adjective because it was verb ending in ing so I didn't touch it. Later, when it looked a bit adjective ending in er, I took a closer look at it. It was very adjective and had a lot of plural noun on its surface. I brought it to my science teacher. "My noun!" she said, "this is a meteorite!" I guess that means that my adjective rock actually came from space. 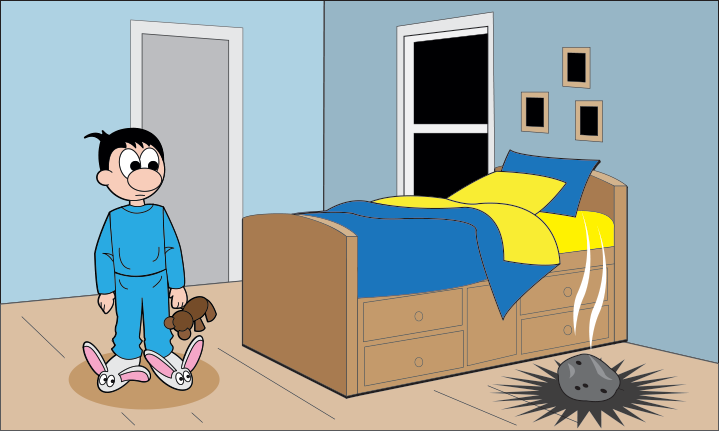 In 1982, Robert and Wanda Donahue were watching TV in their home in Wethersfield, Connecticut. Out of nowhere something smashed through their roof and bounced into their living room. It turned out to be a meteorite. A meteorite is a rock that forms a meteor or a "shooting star" as it burns through the atmosphere. This was the second one to hit the town in only 11 years. Despite this remarkable coincidence, the odds of having a meteorite hit your home⎯or even your town⎯are very low. But when a meteorite is found, scientists get excited. Meteorites come from objects that formed when our solar system was very young. Meteorites can give us clues about how our solar system formed. NASA has an office dedicated to monitoring meteor activity, and they even have a network of cameras that detect and record very bright meteors as they plunge through the atmosphere.