Here is a listing of the missions featured in the Missions to Planet Earth game. 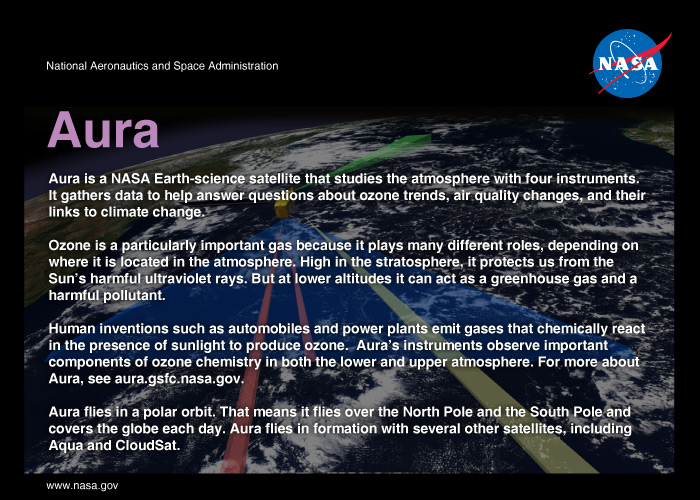 Aura is a NASA Earth-science satellite that studies the atmosphere with four instruments.

It gathers data to help answer questions about ozone trends, air quality changes, and their links to climate change.

Ozone is a particularly important gas because it plays many different roles, depending on where it is located in the atmosphere. High in the stratosphere, it protects us from the Sun's harmful ultraviolet rays. But at lower altitudes it can act as a greenhouse gas and a harmful pollutant.

Human inventions such as automobiles and power plants emit gases that chemically react in the presence of sunlight to produce ozone. Aura's instruments observe important components of ozone chemistry in both the lower and upper atmosphere. For more about Aura, see aura.gsfc.nasa.gov.

Aura flies in a polar orbit. That means it flies over the North Pole and the South Pole and covers the globe each day. Aura flies in formation with several other satellites, including Aqua and CloudSat.

This constellation of satellites is called the "A-Train." 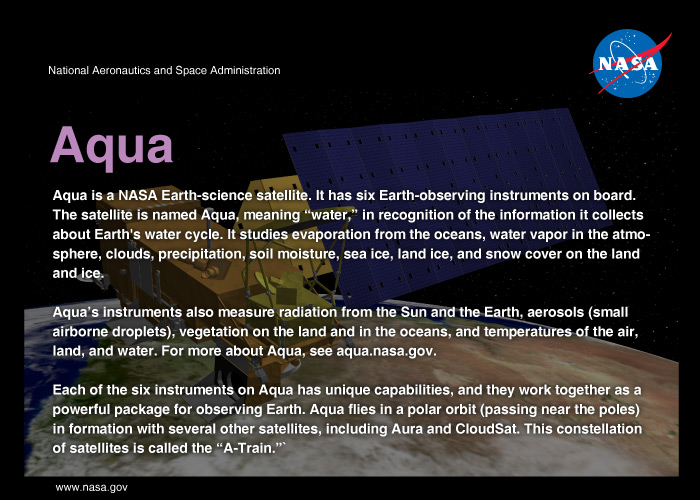 Aqua is a NASA Earth-science satellite. It has six Earth-observing instruments on board. The satellite is named Aqua, meaning "water," in recognition of the information it collects about Earth's water cycle. It studies evaporation from the oceans, water vapor in the atmosphere, clouds, precipitation, soil moisture, sea ice, land ice, and snow cover on the land and ice.

Aqua's instruments also measure radiation from the Sun and the Earth, aerosols (small airborne droplets), vegetation on the land and in the oceans, and temperatures of the air, land, and water. For more about Aqua, see aqua.nasa.gov.

Each of the six instruments on Aqua has unique capabilities, and they work together as a powerful package for observing Earth. Aqua flies in a polar orbit (passing near the poles) in formation with several other satellites, including Aura and CloudSat. This constellation of satellites is called the "A-Train." 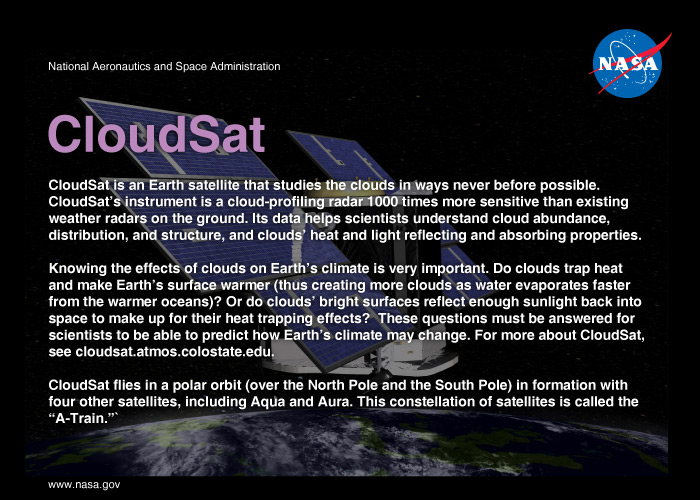 CloudSat is an Earth satellite that studies the clouds in ways never before possible. CloudSat's instrument is a cloud-profiling radar 1000 times more sensitive than existing weather radars on the ground. Its data helps scientists understand cloud abundance, distribution, and structure, and clouds' heat and light reflecting and absorbing properties.

Knowing the effects of clouds on Earth's climate is very important. Do clouds trap heat and make Earth's surface warmer (thus creating more clouds as water evaporates faster from the warmer oceans)? Or do clouds' bright surfaces reflect enough sunlight back into space to make up for their heat trapping effects? These questions must be answered for scientists to be able to predict how Earth's climate may change. For more about CloudSat, see cloudsat.atmos.colostate.edu.

CloudSat flies in a polar orbit (over the North Pole and the South Pole) in formation with four other satellites, including Aqua and Aura. This constellation of satellites is called the "A-Train." 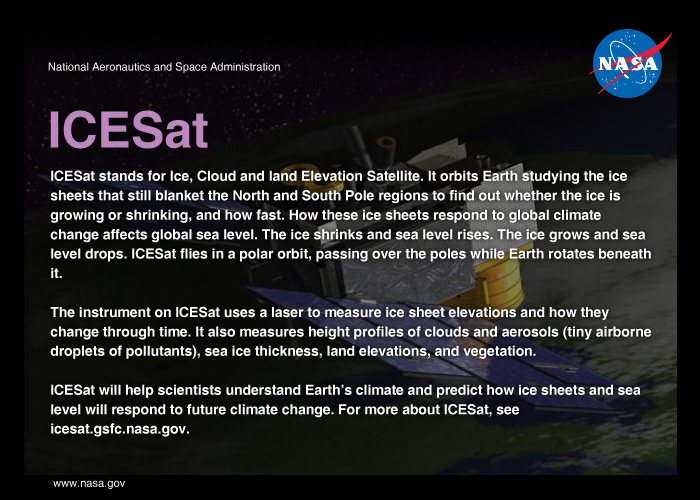 ICESat stands for Ice, Cloud and land Elevation Satellite. It orbits Earth studying the ice sheets that still blanket the North and South Pole regions to find out whether the ice is growing or shrinking, and how fast. How these ice sheets respond to global climate change affects global sea level. The ice shrinks and sea level rises. The ice grows and sea level drops. ICESat flies in a polar orbit, passing over the poles while Earth rotates beneath it.

The instrument on ICESat uses a laser to measure ice sheet elevations and how they change through time. It also measures height profiles of clouds and aerosols (tiny airborne droplets of pollutants), sea ice thickness, land elevations, and vegetation. 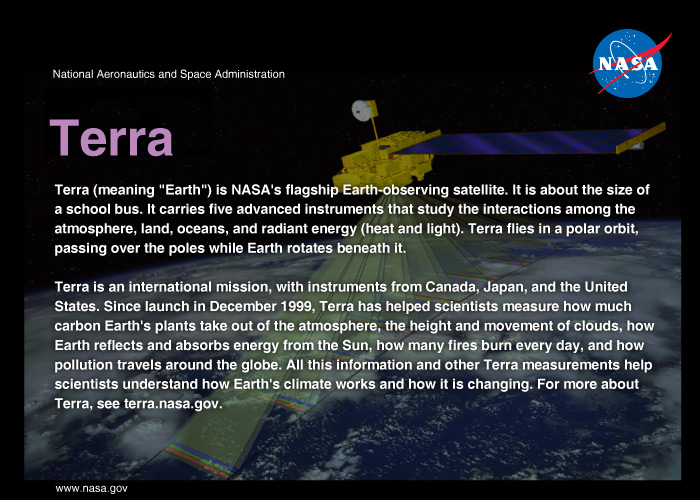 Terra (meaning "Earth") is NASA's flagship Earth-observing satellite. It is about the size of a school bus. It carries five advanced instruments that study the interactions among the atmosphere, land, oceans, and radiant energy (heat and light). Terra flies in a polar orbit, passing over the poles while Earth rotates beneath it.

Terra is an international mission, with instruments from Canada, Japan, and the United States. Since launch in December 1999, Terra has helped scientists measure how much carbon Earth's plants take out of the atmosphere, the height and movement of clouds, how Earth reflects and absorbs energy from the Sun, how many fires burn every day, and how pollution travels around the globe. All this information and other Terra measurements help scientists understand how Earth's climate works and how it is changing. For more about Terra, see terra.nasa.gov.